On June 25, fifteen companies submitted bids for a contract with the Electoral Commission (EC) to update the Voter Register. According to the bid documents, each bidder was supposed to submit three envelops: a technical proposal, a financial proposal and a third envelop was supposed to contain information about the bidding company.

The chairman of the EC, Badru Kiggundu, told The Independent that contracts for the EC officials who sit on the Contracts Committee expired just about the time companies submitted their bids. ‘The good news is that the contracts for these people have now been renewed,’ Kiggundu said with confidence, ‘So the evaluations began last week.’

It is here, sources say, that the catch in the contract to update the register enters more controversial territory. According to a well placed source, the EC actually intends to give the contract to a company of their choice. Currently, there is a company from Abu Dhabi called Global Information Technology (GIT) which, highly placed sources inside the EC say, has been earmarked for the contract already.

In any case, sources say, GIT has experience working in Arab countries but only in printing passports and national identity cards. However, informed sources say, it has no experience in voter registration yet this was one of the preconditions in the tender. In spite of all these problems, GIT has not been disqualified from the bidding process. On the contrary, sources now tell The Independent, GIT is already the favourite of the EC.

A Google search revealed that GIT is a respected company and has worked in Kuwait, Libya, Syria and the United Arab Emirates. ‘It is shocking that the EC wants to use a company whose only experience is in countries that have no experience with democracy,’ Godber Tumushabe, the Executive Director of the Advocates Coalition for Development and Environment (ACODE), the nation’s leading public policy research think-tank said, ‘We certainly cannot have our democratic process managed by a company whose experience is entirely in working in non-democratic systems.’ 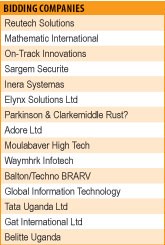 ‘I am not involved in the evaluation of the bids,’ Kiggundu told The Independent in his office, ‘Although we are an executive board, we do not handle procurement directly. That is the responsibility of the Secretary to the Commission, Sam Rwakojo.’ But in spite of repeated attempts, The Independent was unable to talk to Rwakojo understandably because he lost his mother last week and therefore was upcountry.

Now, sources further allege, the EC without consulting other bidders contacted the Abu Dhabi company asking for financing of the project. In return, GIT has now responded with a proposal to finance the entire voter registration exercise.

Meanwhile, Kiggundu told The Independent that the EC asked government for Shs 88 billion for this financial year but was only promised Shs 31 billion ‘ which has not yet even been released to them.
But why does the government have these delays to fund the EC? Observers say that this is strategically important. The release of monies for EC is delayed and often given at the last minute. This creates a stampede that allows the Commission’s secretary to ask the Public Procurement and Disposal of Assets Authority (PPDA) to waive procurement procedures so that the EC can beat the deadline. It is here that the secretary now has power to allocate procurement contracts to favoured companies without any bidding.

‘Rwakojo who is responsible for all this is a well known NRM functionary,’ Erias Lukwago, Kampala Central MP and opposition’s shadow minister for Justice, Constitutional Affairs and Attorney General told The Independent, adding ‘It should not be surprising that government put a partisan person to hold such a strategic position at the EC. We believe that the government has a deliberate strategy to place ghosts [false names] on the register in order to bolster President Yoweri Museveni’s electoral chances.’

The update of the voter register is considered by the opposition, the civil society and many others in NRM as the most crucial part of the   election in 2011. Analysts say that looking at the changes in the electoral performance of President Museveni over the last three elections makes one worry. In 1996, the total number of registered voters in Uganda was 8.5 million. Of these, 6.2 million votes were cast and only 6 million were valid votes. Of these, President Museveni got 4.45 million while his main rival, Paul Ssemogerere got 1.4 million.

However, in 2001, the total number of registered voters was 10.8 million people ‘ a 2.3 million increase in the number of registered voters. Of these, 7.5 million people voted but only 7.3 million votes were valid. Museveni got 5 million votes and his main rival, Kizza Besigye got 2 million. After the 2001 elections and Besigye’s flight to exile, there was a period when the opposition looked vulnerable, disorganised and leaderless and therefore unable to mount any serious challenge to Museveni’s presidential bid in 2006.

It was at this time, according to sources inside NRM, that it was agreed that the government facilitates a clean-up of the voter register to remove ghost names. ‘The EC was sent on missions to Ghana and Mozambique to see how free and fair elections are done,’ a well placed State House source told The Independent. ‘So sure and confident was the president that he personally approved the implementation of the voter photo identification system and even supported the importation of transparent ballot boxes.’

According to Kiggundu, the EC cleaned the register so thoroughly that registered voters fell from 11.4 million in 2002 to only 8.4 million in 2005 ‘ a reduction of three million ghost voters. On October 28, 2005, Besigye without warning and with potential treason charges against him defied all odds and returned to Uganda. ‘This caused a lot of excitement in the country most importantly because it gave the opposition a lot of motivation where they had sunk into apathy and resignation,’ a highly placed NRM source said.

When Besigye returned, queues of people snaked across EC registration centres across the entire country waiting to register to vote. A Daily Monitor and KFM poll taken across the country among people registering got over 99% saying they were registering to vote for Besigye. A similar poll done by BBC yielded similar results. According to some sources at the EC, within two weeks of Besigye’s return, the EC registered two million new voters. Scared, State House sources claim, President Museveni personally called Kiggundu and ordered him to stop the registration.

‘That is total rubbish,’ Kiggundu told The Independent, ‘The president has never called me on something like that; he would never call me to ask me such a thing. It is true many people turned up to register to vote when Besigye came back. But I do not think they were two million. I would estimate something between 700,000 and one million.’

Whatever the facts, the final voter register increased from 8.4m in mid 2005 after the cleaning exercise so that by January 2006 it was 10.4m ‘ almost just half a million voters less than in 2001. Besides, the total number of votes cast in 2006 was 7.2 million with only 6.9 million being valid votes compared to 2001 when total votes cast were 7.5 million with 7.3 million being valid votes in a country with one of the fastest growing populations in the world.

Many observers The Independent talked to said that it is as a result of the cleaning up of the register to remove ghost voters that the performance of President Museveni suffered a significant decline both in the absolute number of votes cast for him and the percentage share of the total vote. Thus, while Museveni got five million votes and 69% of the total in 2001, his total votes were only four million and 58% of the total in 2006 ‘ meaning that one million voters walked away from him and that he was only 638,911 votes away from the rerun.

On the other hand, Besigye got 2.6 million votes meaning he grew his numbers by 600,000 votes between 2001 and 2006. ‘There is no one million voters who walked away from Museveni,’ opposition leader Morris Ogenga-Latigo told The Independent, ‘It should be clear from the above statistics that one million less of ghost voters did not vote for him in 2006 as they had done in 2001 because there had been substantial, but not complete clean-up of the voter register. Our gain was partly attributed to young voters. Under these circumstances, there is no chance ‘ except with an inflated voter register ‘ that Museveni can defeat us in 2011.’

It is because of the above statistics that many leaders of the opposition, the civil society and NRM insiders who want to see a genuinely free and fair election are concerned about the procurement of services to update the register for 2011. ‘If Museveni could lose one million voters between the 2001 and 2006 elections, then he should be worried even more this time because if he loses another one million votes, there is no way he can pull off the 2011 elections,’ Tumushabe told The Independent.

According to columnist Charles Onyango-Obbo, the figures above show that if Museveni’s handlers want to rig the election, the best place to begin is the register. ‘There are hardly any people who voted for Besigye in 2006 who will change and vote for Museveni in 2011 among existing voters,’ Obbo said adding ‘although there are many people who voted Besigye in 2006 who will not turn up to vote in 2011.’

Obbo added that NRM’s other strategy for disenchanted Besigye supporters is if they cannot influence the choice of candidate within FDC, they will ensure that there is another strong opposition candidate who is weaker than Besigye. ‘I think it will be the kind of candidate who will not take away NRM core voters but will take Besigye’s disaffected voters.

But on the basis of previous elections, third candidates have performed poorly. Therefore, Obbo has reasoned, the best strategy for Museveni is to keep existing ghost voters on the register. Since Museveni lost one million voters between 2001 and 2006, where does he expect to grow his numbers come 2011? The largest number of new registrations will largely be aged between 18 and 23 years, the age group most hostile to him. Therefore, it is strategically important to constrain new registrations.’

Now relating PS figures with those of the EC, we see the following. In 2005, adult population was 11.7 while total registered voters were 10.5 million ‘ almost 90% of adults registered to vote. Therefore, since Uganda’s population in 1996 was 20 million people, adult population should have been 8.8 million. If 90% of these registered to vote, that would have been 7.9 million voters. Yet in 1996, there were 8.5 million registered voters i.e. 96.5% – a very unusual thing. It seems therefore that in 1996, there were 600,000 ghost voters on the register.