Makerere University in the age of emotion and blackmail

It is now more than a month since President Yoweri Museveni shut down Makerere University in Kampala. The closure was over academic staff abandoning teaching and giving the government an ultimatum: Pay us our unpaid arrears or we will not return to work.

The academic staff members are not striking over salaries – which they had been paid in full. Instead, their strike was over some strange thing called “incentives”; amalgamated allowances for extra work like teaching in the evening or on weekends or having a very large class with many student scripts to mark.
Apparently, the university’s top management organ; the University Council, adopted paying the incentives without a proper budget. If it had budgeted, it would have realized that the incentives scheme was neither affordable nor sustainable as it is supposed to be paid out of Makerere University’s internally generated revenue and cost Shs3.7 billion per month or Shs43 billion a year.

The incentives scheme was created in 2013. The first result was that 81% of the university’s total revenue began going to pay wages alone. As a result, Makerere is unable to invest in many other activities that enhance education like computers, books, laboratory equipment, new buildings, chairs, desks etc.

Under scheme, Makerere lecturers appear to be milking the university’s ability to serve the broader interests of higher education. They have reduced the university it into their ATM.

It should be noted that even without incentives, the government pays 76.6% of the lecturers’ salaries while the university contributes 23.4% from its revenues.

Secondly, from 2013 up to early this year, Makerere was only able to pay these incentives to its lecturers at the cost of not paying other suppliers of goods and services.

The lecturers strike at Makerere is also could be seen as unfair for another reason. Currently, the university has total enrollment of 39,546 students of whom only 6,324 are sponsored by government. This means that 33,222 students are self-sponsored i.e. their parents, guardians or themselves pay fees from which 23.4% of lecturers’ salaries are paid. To refuse to teach when privately sponsored students constitute 84% of the total student population is unfair.

But there is a broader point to be made from the Makerere University strike and closure saga. The age of “democracy” (or mobocracy) is dragging Africa along a slippery slope of fiscal suicide. Across this vast continent, many governments, in the face of electoral competition, make promises to increase wages of public sector employees beyond what is advisable under prudent fiscal management. This problem is most acute in countries where the ruling party faces a risk of losing elections.

In Kenya, Ghana, Zambia, Ivory Coast and Senegal, public sector wages are now between 45% and 55% of the budget against a prudentially recommended ceiling of 30%.

Zambia and Kenya have recently failed to pay their public sector employees. Consequently they have been forced to borrow from abroad to meet public sector wage obligations at home.

This problem is slowly creeping into Uganda whose fiscal regime on public sector wages (they take only 25.4% of the budget) has been very prudent. However, if Uganda seeks to placate the interests of every powerful group with big wage hikes, this prudence will collapse.

And we seem headed into that direction.

In 2013, the Makerere University incentives scheme started when the lecturers went on strike, demanding a salary increase of 100%. In a meeting with Museveni, the president promised that government would meet this demand within two years. Under this promise, a professor would earn Shs15 million per month. But the Ministry of Finance bluntly told the lecturers that it could not meet the President’s promise. That is how the University Council reacted by increasing wages of academic staff by 70%. When the University Council passed that resolution, the university bursar resigned in protest. He told them the pay scheme was not sustainable. When a new bursar was appointed, he too protested payment of the incentives. He explained that the university cannot afford them and stopped paying them.

Yet strikes by Makerere academic staff are not new. It has been the major instrument they have used to force government to increase their pay since 1987. Back then, they were demanding a “living wage”. I was a student at Makerere in 1995 when lecturers went again on strike over salaries. They have done this consistently since. In order to understand the problems of pay at Makerere, we shall ask and answer a number of critical questions to shade light on the problem.

Secondly, has government been insensitive to the salary interests of lecturers? We shall look at the trends in their wages over the last 25 years. We shall look at Uganda’s growing revenue and growing budget to see how lecturers have performed in terms of their share of our nation’s ever growing pie.

Contrary to claims by some of the lecturers, the government has consistently increased their wages at a rate faster than the growth in national revenue and the budget.
To demonstrate this, I have included population growth in my calculations by using per capita revenue (total tax revenue divided by the population) and per capita spending (total government budget divided by total population).

In 1995/96 the salary of a professor was Shs447,893. When adjusted to inflation, it comes to Shs1.55 million in 2015 prices. In 2016, the salary of a professor before incentives is Shs8.03 million. This means that since Museveni came to power, the earnings of a professor at Makerere have increased by 2800% in real terms (meaning after adjusting for inflation) from Shs 272,928 to Shs8.03 million. Even in relative terms i.e. as a ratio to government per capital revenue and per capita spending, there has been great increase in lecturers’ pay. 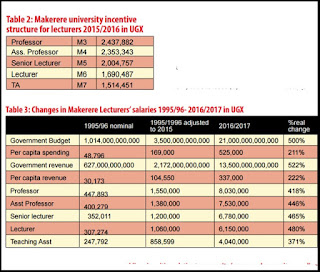 This brings us to the question of whether Makerere lecturers are poorly paid. I have done a survey in private universities and the average salary of a professor is Shs5 million against Makerere’s Shs8.03 million (sciences) and Shs7.5 million (humanities). Secondly, lecturers in private universities have more workload than counterparts at Uganda’s public universities. Yet lecturers at private universities are not striking for pay.
Finally I checked with PriceWaterHouse Coopers, the firm that does annual studies on the relative wages in most companies and organisations in Uganda. Except for top and senior executives of large private firms and a few government agencies, lecturers in public universities in Uganda are among the most highly paid people in this country.
Therefore, it is not pay but the incentive structure created by electoral politics that makes Makerere lecturers seek to blackmail government to constantly increase their pay.

Indeed, if you get total value of incentives (Shs 3.7 billion per month) and divide it by the total number of academic staff (1,461), each one of them would on average get an extra pay of Shs 2.5m. But this money is not paid put pro rata. Table 2 shows the amount of money each category of lecturers gets as “incentives”.
Once you include the incentives, it comes to more than double what lecturers in private universities are paid. And it does not include the fact that many lecturers at Makerere, especially professors and associate professors, get free accommodation whose market value can be equal to their salaries i.e. they live in houses which, if they rented them, would cost $2,500 (Shs 9 million) per month.
I have researched universities in the region and still Uganda government pays almost the same wages as these countries. Indeed, in order to compare like for like, I have converted the wages of lecturers in Kenya, Tanzania and Rwanda into US dollars. But to make it even more understandable, I had adjusted these wages to Purchasing Power Parity in order to get the actual value of this dollar denominated wage. And more than that, I have also correlated it to the per capita income and per capita spending of each of these nations and converted them to PPP. See Table 5. 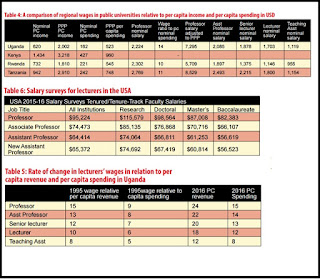 As Table 5 shows, Uganda pays her lecturers a higher share of her per capita income and per capita spending than Tanzania and Kenya, and almost draws with Rwanda. We can also compare Makerere’s pay with average pay for professors in the United States, a country with a per capita income 27 times that of Uganda.
Table 6 shows the average salaries of US lecturers from professors downwards. While the average wage of a tenured professor in America is $95,224 that of his counterpart at Makerere University is $26,689. Now while this looks 3.5 times less, we need to adjust Ugandan wages to PPP in order to reflect their actual purchasing power relative to the dollar. The salary of a professor at Makerere when adjusted to Purchasing Power Parity comes to $87,540. Effectively, Makerere, in a country with a per capita income of $2003 in PPP pays its lecturers almost the same money as an average professor in USA, with a per capita income of $56,000, earns.
These facts are often ignored and it has become increasingly clear to me that public policy debates in Uganda tend to reflect a toxic combination of high emotion and little knowledge. In fact, a culture has grown and consolidated in Uganda’s public debate that is hostile to facts, that rejects reference to scientifically generated and unbiased data in favour of feelings. However, we should remember that righteous anger is never a basis for good policy.
This lesson sunk into me over time as I began to take research seriously. When governments make policy in response to public anger it is often bad policy. Many times when I have taken a position based on my intuitive feelings, and then gone back and subjected them to a scientific analysis, I have found my intuition wrong. This realisation made me feel good because it has consistently released me from partisan anger. And once I was no longer angry, I was no longer committed to reaching the conclusion that righteous anger demands – I am virtuous and government officials are evil.
****
amwenda@independent.co.ug
****
editor@independent.co.ug

Posted by Independent UG at 2:15 AM