Last week, the government presented the national 2017/18 budget totalling Shs24 trillion in spending. For many commentators on the Ugandan traditional and social media scene, the budget is as an economic issue.
Yet money is an important political resource. It gives government resources to rent political support and to buy weapons, train and equip the security forces to coerce it.
To understand the durability of President Yoweri Museveni in power, one has to study the evolution of Uganda’s economy through the budget. It also helps us understand why the opposition to him is lost.

Exactly 25 years (or a generation) ago in 1992, Uganda’s budget was Shs647 billion, which, when adjusted to inflation comes to about Shs4.2 trillion in 2017 prices. Of this, domestic revenue was Shs281 billion (or Shs1.8 trillion in 2017 prices). Now remember that the population of Uganda then was 18.6m people.

Fast forward to 2017; the budget is Shs24 trillion (see note bottom) of which domestic revenues contribute Shs16.1 trillion (70%) while external resources contribute 7.1 trillion (30%). In absolute numbers, public spending per capita is Shs600,000 while per capita revenue is Shs400,000. Therefore, since 1992 and in real terms (meaning after adjusting for inflation) the size of budget has grown five times, domestic revenue has grown nine times and per capita revenue has grown four times. 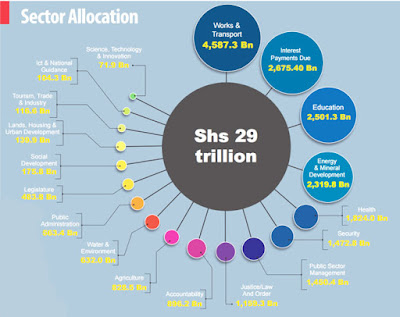 This is not money but politics. It means Museveni has more resources to finance public goods and services in order to win over the masses.

It also means he has much more revenue to co-opt influential elites with state patronage to compensate for declining legitimacy. And finally he can train and equip the security services more effectively to clobber the opposition.

Hitler’s mistake in Russia has been the opposition’s (and indeed the wider elite Ugandan mistake) with Museveni.

Museveni may have organised his politics along the same lines as Mobutu Sese Seko of former Zaire and Daniel arap Moi of Kenya of corruption and patronage. But he has sustained a good rate of economic growth, which has given him consistently growing revenues to build state capacity to serve the citizens and protect his power.

But these numbers also indicate that many more people are getting better off. For example, while 56% of the population lived below the poverty line in 1992, this number had fallen to 19% in 2014 and may by now have fallen even lower today.

In his many battles with the opposition, this has been Museveni’s greatest card. Yet the opposition genuinely believe the economy is declining and the people getting poorer. Hence the opposition fight an enemy whose capabilities they do not understand. And the worst danger in any such struggle – whether it is to win a military campaign, acquire market share in business, or gain political traction in elections and protests – is to underestimate the enemy.

This was perhaps one of the worst mistakes Adolf Hitler made during the German invasion of the Soviet Union in 1941.

The Germans estimated that the Soviets had only 200 divisions. Within the first two weeks, they had identified 360 divisions. They underestimated the quantity and quality of soviet weapons – tanks, planes, etc. Once deep inside Russia, the Germans were confounded by the reality.

The T34 tank brought what became known as “the tank terror” as German anti-tank shells bounced harmlessly off it. The MiG 21 proved a match to the German Messerschmitt which had terrorised the French and the British the previous year.

But most critically, Hitler had calculated that Russians hated Soviet leader Josef Stalin so much so that a military invasion would produce a political collapse in the Soviet Union. Here he allowed his prejudice against Stalin and the communist system to lead him to this tragic conclusion.

He told his generals: “We only have to kick in the door and the whole rotten structure will come tumbling down.” Yet Soviet people and the communist leadership did the exact opposite: they remained loyal to their country; the soldiers, even when surrounded, fought with ferocious tenacity, holding their ground and slowing down the German advance.

Hitler’s mistake in Russia has been the opposition’s (and indeed the wider elite Ugandan mistake) with Museveni.
They have deluded themselves into the belief that the economy and public goods and services are all declining and people becoming poorer and angry. Here they have listened to their feelings and of those nearest to them than the wider country. But this means they ignore reality.

I do not know what strategy the opposition can adopt. But I know that sound strategy has to be firmly based on reality, not prejudice. It must, therefore, recognise that Museveni has presided over an ever growing economy which gives him ever increasing revenues to finance his political survival.
Indeed, a growing economy and growing incomes also pose a strategic threat to Museveni’s power. Many Ugandans are leaving village tillage for urban industry and services. Many more are getting educated. And even many more are getting access to modern communications.

All these factors expose them to the rest of the world, especially the developed world. Thus young Ugandans are getting ever more aspirational. Yet the rate of growth in expectations is faster than the rate of growth in opportunities to satisfy them. The mismatch between these expectations and available opportunities is creating social frustration, a factor that explains anger among the youths.
Opposition presidential candidate for life, Dr. Kizza Besigye, has a good intuition of this anger. He has sought to exploit it, even though unsuccessfully, to stimulate some form of urban uprising and bring down the government.

However, Besigye has assumed that his feeling that the economy is not growing and poverty is increasing is true. He has, therefore, positioned his strategy on this wrong assumption, with a fatal result. It is okay to claim the economy is declining as a political point at a rally.
It is fatal to use such a false and mistaken belief as a foundation of your strategy. It makes you underestimate the enemy and fight blindly without taking serious cognisance of his strategic advantages.

**  NOTE: Of the Sh29 trillion, Sh4.9 trillion in the budget is not money available for spending but is old money government had borrowed domestically and the Finance Act demands it be consistently reflected in order for interest payments on it to be accounted for.
Tweet

Posted by Independent UG at 1:28 AM