The myth of Museveni’s rigging

Here is why if there was pre-ticking of ballots, it had little influence on the final results

THE LAST WORD | ANDREW M. MWENDA | There is a myth in Uganda’s opposition that President Yoweri Museveni steals their votes. Opposition leader Dr. Kizza Besigye has been the principle promoter of this myth, claiming that he won all the electoral contests against Museveni in 2001, 2006, 2011 and 2016. This has stifled the opposition in Uganda, locking them in victimhood where they indulge in self-pity and refuse to recognise their own internal weaknesses and design a strategy to overcome them. 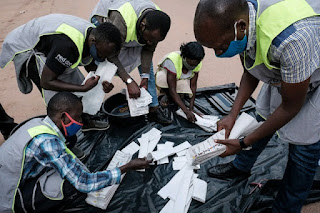 Like all myths, there is always some convincing evidence. For instance, opposition activists point out the many polling stations with 100% voter turnout and where Museveni gets over 95%. Such turnout is evidence of electoral malpractice. But does such rigging explain Museveni’s victory? For instance, in 2016 there were 133 polling stations with 100% voter turnout. Total votes in them were 43,000. Museveni had 5.97 million votes against Besigye’s 3.5 million. Thus, even if results from all those 133 polling stations were cancelled, it would not affect Museveni’s margin of victory.

If you cannot count what matters, you make what you count matter. That has been the tragedy of Uganda’s opposition. They suffer from the “streetlight” effect, where the drunken man searches for his missing keys not where he dropped them but where the light is. Human beings have the habit of looking for things in places where it is easiest to search for them rather than in places where the truths is more likely to be found. So the opposition in Uganda do not do the hard work of going through the electoral results of each district or sub county to see voting patterns.

There was a time Museveni used to lose badly in the north. In 2006, he got a miserable 12% in Gulu against Besigye’s 82%. In this election, Museveni swept West Nile and the entire political north like he has never done before. Even if we accepted, just for argument’s sake, that Museveni steals votes, the question for the opposition is: what made it possible for him to lose miserably in 2001 and 2006 but win it in 2021? What anti rigging firewall did the opposition have in the north that they have suddenly lost now?

This election exposed the myth of Museveni’s rigging in Buganda. He was beaten in this region, which was previously his stronghold, by a new comer half his age with a political party only three months old, not enough time to build an anti-rigging firewall. What happened to Museveni’s rigging machinery in Buganda?

Indeed, if you comb through the electoral results over time, you realise that Museveni’s much touted rigging machinery is only present in the cattle corridor, where his ethnic kin; the Bahima, reside. In 2016, 79% of all polling stations reporting 100% voter turnout were in Nyabushozi (37%), Nakaseke North (15%), Kazo (10%), Rwampara (9%) and Mawogola North (8%). These are places where voter turnout and Museveni’s margins would have been very high.

So the rigging here is largely because his support is very strong, the opposition is almost absent. Given the difference in votes between Museveni and his nearest rival, such rigging is statistically insignificant. Indeed where and when the opposition have had such strong support, they too have rigged. In 2001, there were 1,024 polling stations in northern Uganda with more than 90% voter turnout, and Besigye got more than 90%, in some even 98% of the vote. Such abnormal turnout and voting pattern is a proxy for rigging.

So opposition activists have been circulating videos showing people pre ticking ballots for Museveni supervised by soldiers speaking Runyankore. It is very possible that these videos were stage-managed by the same opposition activists. It seems they intended to use social media to circulate these videos in order to create an impression of massive rigging, hence government shutdown social media. Why would Museveni diehards video record  themselves doing such rigging?

I have gone through over 60 districts in all regions. Voter turnout was lower in 2021 than in 2016 in percentage terms. In many districts, even with increased number of registered voters, the absolute number of people turning out to vote was lower. If there were massive pre ticking of ballots it would have driven up voter turnout.

There was one loud message in this election both the NRM and the president need to take home seriously: Ugandans are tired of Museveni. In this election he faced a new comer, young with a reputation as a weed-smoking Rastafarian singer who did not look presidential and was totally clueless on public policy. Many voters (43%) did not vote. So there was no growth in Museveni’s total vote in spite of an increase in the voter register of 3.2 million voters.

There was also a big message for NUP and its candidate, Bobi Wine. Voters felt he is not presidential. Even in his Buganda ethnic base, voter turnout was low. In Kampala, only 42% voted, down from 51% in 2016 when opposition blamed delayed delivery of ballot papers. I don’t know what excuse will be advanced this time given that security deployments were similar. Luwero fell from 66% to 59%. Kiboga from 69% to 61%. Mityana from 74% to 66%.

The key to Museveni’s victories is in voter turnout. Vast numbers of Ugandans opt out of voting due to the radical extremist stance of opposition politicians. In trying to please its extremist base, the opposition has alienated the moderates, and thereby sustaining enthusiasm but not growing their numbers. That is why in spite of an increase in voter registration by 3.2 million, all of who are young people, Bobi Wine got less votes than Besigye in 2016.