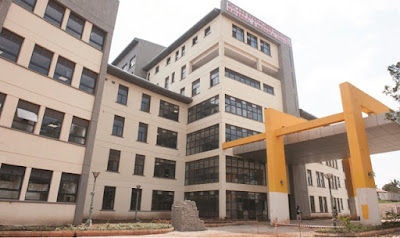 A new Mulago arises: The challenge the new hospital will face and what can be done to protect it from Uganda’s politics

Last week, I visited the new specialised maternal and neonatal center being constructed at Mulago Hospital. With a built up area of 24,000 square meters, ten floors tall and equipped with 450 hospital beds, it is going to be the largest specialised maternal and neonatal hospital in Africa. It is being built to handle such things as in-vitro fertilisation, embryo transfer, pelvic reconstruction, hysteroscope, etc. this will be one of the most advance hospitals on our continent. It will cost $24.4 million to construct, $7.8 million in equipment and another $1 million in training of its staff. The top floor has a presidential suite and eight executive suites for the rich to pay top dollar for the best medical service.

Then I visited the old Mulago Hospital, the one that was handed over to Uganda on our independence day as a gift from the departing British colonial government. It has been shut down for renovation that will cost $29 million for civil works, $22.8 million for equipment, $1 million for training and $1.6 million for the integrated hospital management system – and they have laid 70km of fiber optic cables to handle this. The hospital, literally stripped bare except for the walls and the slabs, is being refurbished and refitted with everything new – from sockets to wiring, piping to windows, doors, sockets and switches. It will also have an organ transplant unit, which will handle transplants for hearts, kidneys, lungs, born marrow, liver, cornea etc. Later it will handle pancreas and stem cell transplants.

I was happy to learn that over the last five years, the government has been sending doctors abroad for training in different highly specialised areas such as anaesthesia, intensive care, etc. which are related to organ transplants and to maternal and neonatal issues. Listening to the hospital administrators, I was impressed by the scale and scope of the works, the quality of equipment and staff and the vision of the hospital they envisage. They told me that they are looking to a future where Mulago will make Uganda a nation for medical tourism; where specialists and patients would come from far and wide to work at and be admitted into the hospital. This is a vision of recreating Mulago of the 1960s that we have all heard about – a center of excellence.


As I listened to this vision, I also got concerned because knowing Uganda it is very likely that this vision will fail. The biggest danger to Mulago’s vision is our democracy. Uganda is a nation with a lot of space for democratic expression. And the government of President Yoweri Museveni is excessively sensitive to public opinion. So I have been thinking about how this new vision of Mulago as a highly specialised and high quality hospital can be sustained.

The biggest risk will be to attempt to make the hospital free and accessible to all. Uganda cannot afford that. If it tries, Mulago will immediately degenerate into what it had become previously – a place where the sick go to die and the healthy to contract diseases. The solution is to make it undemocratic and unfair. Undemocratic in that professional consideration, not popular pressure, should determine its policies. Unfair in that only those who can afford to pay should get access

Of course it is unfair to exclude the poor and many people would be justified to be angry with this.
Why should our government have such a good hospital that does not serve its most vulnerable citizens? However, righteous anger is rarely a source of good policy. The only way in which the poor can get access to such high quality and expensive services is through a national medical insurance scheme. Knowing Uganda, such a scheme can easily lead to tears, as initial weaknesses would turn it into an opportunity for political grand standing.


It is never obvious to us that any new such nation-wide scheme will go through a process of learning. This would inevitably involve a lot of mistakes such as fraud, nepotism, incompetence etc. The strategy is always to play the long game, accepting short-term weaknesses and mistakes as the price for one’s long-term goal. But with politicians in power making short-term political-survival calculations while facing intense public scrutiny and excessive mistrust in public institutions, no government can afford to host such grave mistakes that are an inevitable part of learning and experimentation.

In such circumstances, the solution is a painful one: concession the hospital to an outside company, preferably owned by Europeans such as the British or Germans. This will protect it from political interference. Under such circumstances, if government wants its poor citizens to access these highly specialised services, it should pay for them in cash. Short of this, government would send its poor citizens to the hospital and delay to pay. The hospital would run out of money to repair and maintain equipment, buy drugs and pay staff. That is how many public institutions in Uganda have failed to function.

The debate on health in poor countries is a toxic combination of high emotions and little knowledge, dominated by elites. Elites are the most articulate sections of our society. They dominate the mass media and all other spaces for public expression. They thus exploit this to push public policy in health towards those areas of spending that address their interests instead of the interests of the most indigent citizens.

Poor countries lack resources to pay for medical costs for all their citizens. They also lack the institutional capacity to use the little resources they have efficiently and effectively – Rwanda being a rare exception. The reasonable solution is to focus meager health resources on those areas where they can have the highest impact for the most people. For example, most deaths in poor countries are among children before the age of five years. Therefore, the challenge poor countries face is not highly complicated health problems such as organ transplants, cancer, complicated surgery, heart disease etc. but communicable diseases such as diarrhea, cough, TB, and malaria.
The most effective way to handle these illnesses is not investment in curative (or clinical) medicine – hospitals, doctors and nurses. It is in public health programs such as immunisation, vaccination, vector control, better hygiene, access to clean water, good nutrition and improved sanitation. Many of these interventions are not even part of health spending. Yet they would save many lives by reducing infant and child mortality and thereby increase life expectancy. But who will listen to this enlightened gospel? It’s so unpopular.

Posted by Independent UG at 4:25 AM