Defying the odds, defining oneself

“In these bloody days and frightful nights when the urban warrior can find no face more despicable than his own, no ammunition more deadly than self hate and no target more deserving of his true aim than his own brother, we must wonder how we came so late and lonely to this place.” Maya Angelou.
Brian Klaas, a fellow at the London School of Economics, perhaps did not know what he was getting himself into when he tweeted his Washington Post article, saying: “As the world focuses on Trump, African despots are violating term limits and badly overstaying their welcome.”

It was an article attacking President Paul Kagame of Rwanda, calling him a despot and a murderer and referred to the elections that have just been held as a sham. In response, thousands of Rwandans took to Twitter and savaged him in one of the most thrilling twitterstorms I have seen. Turns out the people he was “fighting for” don’t want his assistance.

“Over the last several decades,” Klaas wrote with the arrogance of his fellow colonialists, “Western governments (sic) have pushed for democratic reforms in Africa. In response to that pressure and calls from their own citizens (this comes as an afterthought) 18 African countries instituted constitutional two-term limits… But in Africa rules are far too easily bent or broken.” Klaas ends with his call on Western governments: “Now the time has come to push governments [in Africa] to obey their own rules.”

For Klaas, Africa is one huge undifferentiated mass of politics so that what happens in Gabon can simply be copied and pasted on Kenya and the analysis remains the same. Yet while he was right to say that attempts to remove term limits have caused popular protest in some nations of Africa, he ignored the fact that in Rwanda, it was popular and peaceful. In fact there would have been popular protest if the term limits had not been removed.

More critically, Klaas like many Europeans, Americans and African elites believes that our democracy should be the responsibility of Western powers. We Africans are supposed to be like children: instead of being active participants in the struggle for our freedom, we are to be passive spectators as white superintendents deliver it to us as charity. And it is not only democracy. The struggle to wrestle control of the destiny of Africa from Africans to white superintendents is tenacious and broad.

For instance, our human rights are supposed to be defended by Human Rights Watch and Amnesty International, our press freedom by the Committee to Protect Journalists and Reporters Without Borders. Our public policies are supposed to be designed by the World Bank and IMF; our leaders are to be tried by the International Criminal Court; our poverty is fought by Oxfam and Action Aid; our story is told by the Washington Post and CNN; our hungry are fed by World Food Program while our sick are treated by World Health Organisation and Doctors Without Borders.

Even our heroes are supposed to be white and if black they are supposed to be anointed in Washington DC, London and Paris. Thus Bono and Angelina Jolie are the activists in the struggle to end our poverty while professors Jeffrey Sachs and Paul Collier provide the policy blue print. Our leaders are despots; so we need Barack Obama to tell us how to govern ourselves. For a country in Africa to be accepted as democratic, the decision is not to be taken by its citizens but by politicians, diplomats, “experts,” think tanks (like Freedom House) and journalists in Western capitals. 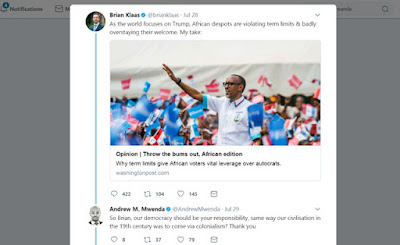 The African presented in this narrative is always a hungry mother carrying a malnourished child on her back stretching out her emaciated hand to a white aid worker for food.

If an African is presented in positive light, he is a human rights activist or a journalist who has run away from the continent, being hunted down by his own government. Message: everything in Africa is bad – even the few who seek enlightenment are chased away by despotic leaders.

This vision of Africa has been presented to us in movies, books, newspapers, radio, television, lecture rooms and public speeches – everywhere. The best and brightest in our society go to Yale and Stanford, Oxford and Cambridge to receive this gospel of who we are, what we need and how we should organise our lives. We have internalised this gospel. We hate our systems, our governments, our leaders, our public servants and ourselves – Maya Angelou’s comment above tells it all.

Unable to see anything good in ourselves, our governments, our leaders, our culture
and or heritage, we turn to the West for solutions. They tell us: to develop we need foreign direct investment. So multinational capital takes over the commanding heights of our economies – banks, telecommunications, hotels, etc. To be stable, introduce democracy made in Holland in one day regardless of circumstances. Then we get Libya. The list of instructions is too long to exhaust here. Suffice it to say that Africa is mentally captured.

This presentation of Africa by whites is not new. It was the strategy that won the war to establish colonial rule on our continent. The colonialist argued that the African needed to be liberated from poverty, both material and spiritual hence commerce and Christianity. The African also needed to be liberated from the tyranny of custom and the despotism of local chiefs and kings. Colonialism was presented as an act of altruism where Europeans would carry the burden of civilising the natives.

We should not forget that a lot of the critique made of Africa by 19th Century Europeans was not false. Nowhere is propaganda more powerful (and dangerous) than when it uses (and abuses) obvious facts. The consequence of the colonial message was that Africans actively participated in their own enslavement. After 70 years of colonial rule, where the colonialist committed genocide in most nations on our continent and did little to develop us, we should have learnt the lessons from these false prophesies. But we haven’t.

One country is defying many aspects of this gospel that belittles Africa. And that country is Rwanda. That is why Klaas got savaged on Twitter whereas in most of our nations, a savage attack on a government by a Western scholar or journalist receives widespread approval and is celebrated. In post-genocide Rwanda, liberated from the shackles of mental slavery, such colonialist attitudes ignite resistance. Rwandans reaffirm their independence, their dignity and their control and direction of their destiny. Klaas has tasted it. I would love to hear his view of Rwanda now.